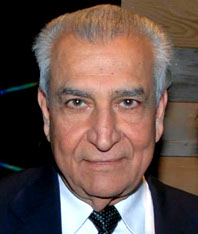 Mr. Prem Lalvani is a legend and truly a world-class citizen. Recognizing this merit, Mr. Lalvani was presented with the Asian American Award of the Decade by the fourteenth Annual Asian American Coalition Lunar New Year Celebration Committee of Chicago at its annual banquet.

Mr. Lalvani initiated the Sindhi Association of Chicago in 1965 and served as its President in 1969. He was the founding member of the West Suburban India Society, and its President in 1970, 1980 and 1992. He was also the founding member of the Alliance of Midwest India Association in 1986 and its past President. He was member of Hindu Host Committee in 1993 during the Centenary Celebration of Parliarnent of World Religions. Presently serving as its executive director, he initiated the Alliance of Sindhi Associations of America in 1993.

Mr. Lalvani has been deeply involved with a vast range of organizations among the Asian American community and mainstrearn Americans. He was one of the organizers of India's Independence Day Parade, sponsored by the Alliance for several years. Since 1987, he has organized Thanksgiving dinners and free health fairs for uninsured persons through the Alliance of Midwest India Society. He also holds several other public positions, in the National Association of Social Workers. Social Workers in Emergency Medicines, West Side Alcoholism and Substance Abuse Network, Chicago Sexual Assault Service Network and Service and Rehabilitation Committee of American Cancer Society.

Mr. Lalvani has been an exemplary role model for his two children, Nadja and Prem Jr. who have also been actively participating as volunteers with their father's zeal and enthusiasm in many key events. For thern it is a genetic blessing indeed that has been handed down to them from their forefathers.

Mr. Lalvani's father, the Late Dr. Tarachand Lalvani, a journalist. medical doctor and labor leader was involved in India's Independence Movement with Gandhiji and other freedorn fighters. His mother, Rukmani, was the first Indian woman in British India to becorne the editor of Karachi Daily, an English newspaper.

Mr. Lalvani received a Masters degree in Social Work from Tata Institute of Social Science and a Master degree in Education frorn De Paul University. Social work and community service are two areas that are very dear to Lalvani. As a community activist and a social worker, he is totally dedicated to his community and the cause.

No single individual has done so much for the Asian American community as Mr. Lalvani. He has the charisrna and magnetism of a leader of the entire community that respects him. He is a people's person, caring deeply for the less fortunate and has a calm and peaceful countenance when handling volatile inter-personal situations. Despite his manifold achievements he remains a down to earth perrson. Time and tide have taken him places around the globe but he stands as resolute as ever in his sole mission of helping the world become a better place for all humanity to live in.