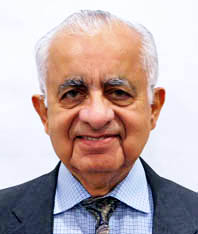 Mohan Karamchandani was born in 1937 in Karachi, India and moved to Baroda in 1947, due to the partition. There, he and his family lived for many years while his father served as a professor of Mechanical Engineering at M.S. University of Baroda. In 1960, Mohan received his Bachelor of Science in Mechanical Engineering from M.S. University of Baroda and went to on to be an Executive Engineer at Mining and Allied Machinery Corporation in Durgapur, India. In 1970, he made his journey across the world to Chicago, Illinois with the hope of ensuring a better life for his family. Thus began Mohan’s life of service. He spent many years working at General Motors Corporation, during which time he also became an ASQ certified quality engineer (CQE), and retired in 1989. He then started his own company -- Exel Printing Company -- in Glen Ellyn for ten years, and finally retired in 2000. Now in retirement, he sees the beginning of a new life, a life charged up with zeal and enthusiasm to serve the community.

Mohan is actively involved in community projects and has a keen interest in the welfare of the underprivileged. He is the Vice President of Alliance of Global Sindhi Associations, Inc. (AGSA). The main objective of the Alliance of Global Sindhi Associations is to preserve and nurture our Sindhi traditions, language and values for the future generation. He has been on the AGSA board for 25 years. For the last 12 years, he is also the Secretary for the Board of Trustees of Hari Om Mandir, Medinah Illinois, a place of worship where spiritual, religious and social needs of devotees are fulfilled. He has also served in various capacities and has remained a strong pillar of support for the Sindhi Association of Metropolitan Chicago, including through his prior role as Vice President. In addition, he is an Executive Committee member and Chair, Souvenir Committee of Asian American Coalition of Chicago in both 2003 and 2011. He is also Treasurer of the Sadhu Vaswani Center in Chicago, a religious organization dedicated to devotees of Sadhu Vaswani, a well known and highly worshipped spiritual leader. Despite his various commitments, he finds time to volunteer for a myriad of social and cultural organizations. The man, for whom ‘service with a smile’ is the motto.

In 2018, Mohan received the Exemplary Indian American Community Service Award at the Asian American Coalition of Chicago at its 35th Annual Lunar New Year celebration at Hyatt Regency O'Hare, Rosemont Illinois on February 24. This award was given to Mohan in recognition of his dedication and commitment to community service.

He is a devoted husband, a loving and caring father and deeply affectionate grandfather. He lives amidst a big happy family, with his wife Jyoti, son Naren and daughter-in-law Aarti, daughter Sangeeta and son-in-law Atul, and grandchildren Rishi, Anuj, Simran, Amaya and Aanya. For friends, he is a true friend. A shining example of ‘a friend in need is a friend indeed.’ He has traveled a long way since he came to this country. He has carved a niche in the hearts of friends and strangers whom he befriends – the Karamchandani’s are known for their warm hospitality and loving welcome.